Showing posts from September, 2011
Show all

FALL SALE! 20% off purchase in my Zibbet shop!

Beazers Garden Naturally with Love on Zibbet.FALL SALE 20% off! Treat yourself, or someone you love!
Post a Comment
Reactions:
Read more 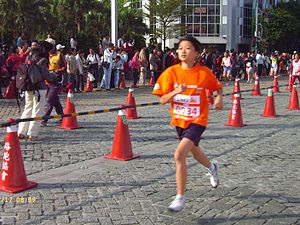 Image via Wikipedia
I overheard two people talking the other day, they were supervising some kids at play…  “There can only be one winner.” He said about the game in progress, with children running around having fun, unaware of the “rules”.


“I don’t want to be the one to tell that to the kids.” She said foreseeing the reactions.

I know that sounds idealistic and naive, after all life, like some games, puts some people on top. At least temporarily.

How can there be just one winner?  If you are the fastest on the playground are you supposed to dominate in all areas of life then?

Telling a person or group that they are “the best” at one thing is great for their ego, and we all need that boost every now and then, but what about when you aren’t as good as someone else at one particular moment in time, are you a loser then?  Thought of and treated as such?  Is this what we are telling kids? They (we) have to live in constant one-upsmanship for the …
Post a Comment
Reactions:
Read more

20% off purchase with coupon code HOLIDAY2011Get a free gift to share with a friend!http://etsy.me/gUDwk0
2 comments
Reactions:
Read more


“Neither here nor there Nor anywhere, The light illuminates But does not spare, Details discouraged, Discretion shall cage, Discarding dogma Only grace to the grave.”
~S.K.Lindeman
Post a Comment
Reactions:
Read more
More posts

WAYS TO USE ESSENTIAL OILS

Own an online shop?

Let your customers get you more customers! Use this link for $50 free credit for ReferralCandy!